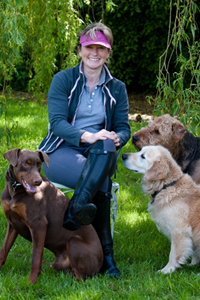 I have always been passionate about horses, even as a small child I would spend as much time as possible around them at the local stables. At 17 I was offered the opportunity to train on the continent with Raymond Withages. His wife Mariette Withages was until recently president of F.E.D. and he himself had trained in the Spanish Riding School and was a genius with a horse. In my first year with them I was competing for Belgium in international competitions all over Europe. At 20 I was offered a place to train with the Cadre Noir in Saumur and with George Theoderescu in Warendorf by George himself, but I decided to return to England so as to try for a place on the GB young riders team. On my return I received a scholarship to train with Ferdi Eilberg, I remember there were many applicants, but only one place up for grabs!

With my horse ‘Mon Petit’ I went on to represent GB at two young rider European championships and then later represented GB several times at senior internationals competing up to Grand Prix level. I currently have two fantastic warmbloods, Uvaliero aka ‘Littley’ (although he stands at 17.1!) and my black Jazz stallion Bravour.

My husband David was brought up around horses in the New Forest and his mother was a dressage judge. These days he is a very keen polo player (when he gets the chance!).